What 5G stocks will get a boost as 5G wireless networks are deployed and more 5G-capable smartphones, laptops and electric vehicles hit the market? Look for management commentary on company earnings calls.


Many analysts view Apple (AAPL) as one of the best 5G stocks as wireless phone companies expand 5G mobile networks. Investors focus on the semiconductor supply chain of Apple stock and the smartphone ecosystem. A JPMorgan analyst said investor expectations for the iPhone 13 roll-out are too low.

And, T-Mobile US (TMUS) is expected to step up 5G wireless promotional offers after the iPhone 13 models are announced.

The 5G wireless era is gaining momentum. 5G smartphones accounted for 60% of all new smartphones shipped in the June quarter, up 8% from the previous quarter, said a Susquehanna Financial report. In China, though, shipments of 5G smartphones slowed in May, analysts say.

5G subscriptions with a 5G-capable device will jump 163% to 580 million by the end of 2020, up from 220 million last year, projects network gear maker Ericsson (ERIC).

Mobile PCs are also being equipped with 5G wireless modems. Strategy Analytics estimates that 9.9 million laptop computers worldwide will have 5G modems by 2025, up from 700,000 in 2021.

In addition, the first 5G-capable autos will be arriving in the fall from Germany’s BMW and Chinese car makers.

Bank of America analyst Vivek Arya is bullish on chip makers, such as Marvell Technology (MRVL), as the best 5G stocks.

“We are still early in the 5G cycle, with less than half of base stations and only 20% of smartphones upgraded,” he said in a recent note to clients. “As 5G handset penetration rapidly expands, we expect handset-focused companies to see a significant portion of their revenue quickly become reliant on 5G. Additionally, 5G infrastructure growth should rapidly expand.”

Arya expects a surge in 5G chip shipments in the back half of 2021.

“5G could be the ultimate ‘reopening’ theme, as consumers venture out and demand faster cellular broadband coverage and capacity versus last year’s dependence on Wi-Fi,” he added.

Shares in network gear maker Ericsson rose 35% in 2020. But Ericsson stock only holds a Relative Strength Rating of 45 out of a best-possible 99.

A wide range of tech companies are building 5G ecosystems for private networks that deliver business-to-business services. Telecom industry group 5G Americas forecasts that the addressable market to incorporate 5G into private business networks will jump sharply over the next five years, to $16.9 billion in 2025 from $1.9 billion in 2020.

How fast consumers will upgrade to 5G iPhones amid the lack of a new, “killer” application is still being debated among Wall Street analysts.

As expected, Verizon Communications (VZ) emerged as the highest bidder for 5G wireless spectrum in the telecom industry’s most expensive auction ever, followed by AT&T (T) and T-Mobile. Verizon recently updated investors on its 5G investment plans.

Chip maker Nvidia (NVDA), which belongs to the IBD Leaderboard,  and Alphabet‘s (GOOGL) Google on June 28 announced that they’re establishing an AI-on-5G Innovation Lab, to speed up app development for smart cities and smart factories.

Nvidia is a leader in artificial intelligence but competition is rising.

Google stock also belongs to the Leaderboard watchlist, which features leading stocks that stand out on technical and fundamental metrics. Google also is partnering with Ericsson in 5G app development.

Qualcomm stock and Qorvo have been featured as the IBD Stock of the Day. Skyworks recently dropped out of the IBD 50 roster of fast-growing companies.

One issue for Qualcomm is that Apple and Samsung are building more homegrown 5G devices. “Internal solutions from Samsung could become more prevalent, we could start to see Apple experiment with its own 5G in areas such as iPads,” Morgan Stanley analyst Joseph Moore said in a note to clients.

T-Mobile has jumped ahead of Verizon and AT&T in deploying a 5G mobile network using high-performance, midband spectrum.

Verizon says its mmWave-based 5G wireless services, branded Ultrawideband, were available in parts of 64 cities at the end of 2020. Verizon aims to almost double that in 2021.

5G wireless networks will provide faster data speeds to consumer devices. Eventually, it’s expected that two-hour movies will be downloaded in 5 seconds vs. 6 minutes on a 4G network. Even so, the growth of some 5G stocks depends on the emergence of new consumer smartphone apps.

In addition, 5G enterprise applications in smart factories and other business uses are expected to come into view in 2021.

“Enterprise solutions could be the largest 5G revenue drivers, including factory and manufacturing, with telemedicine and health monitoring also new drivers,” Raymond James analyst Ric Prentiss said in a note.

In time, the breadth of 5G stocks will expand. The future of 5G wireless lies in the industrial Internet of Things, remote health care, drones and robotics, autonomous driving, smart cities and more.

For some 5G stocks, the long-term opportunity will be tied to new networks that blur the line between mobile and fixed-line infrastructure.

Further, 5G also is a long-term opportunity for network gear makers Ericsson, Nokia and Samsung. In early September, Samsung won a $6.65 billion 5G contract from Verizon. The deal dealt a blow to Nokia, a longtime supplier to Verizon.

5G networks will connect to fiber-optic networks for “long haul” purposes. That will provide reliability for emerging automotive, robotics and medical applications. Potential 5G stocks to buy include Corning (GLW), Ciena (CIEN) and other fiber-optic players.

Only 19% of U.S. business professionals claim to understand the benefits of 5G, according to a Ciena survey done with research firm Dynata.

“5G is much more than just a faster wireless technology,” said Steve Alexander, Ciena’s chief technology officer in a release. “5G enables constant connectivity for people, machines and devices and is the infrastructure that the Internet of Things will rely on to create the cloud experience that we all need in our increasingly digital world.”

Rysavy Research projects that there will be 1 million U.S. outdoor small cells by 2028, up 10 times from today’s levels.

Some telecom firms aim to provide fixed 5G broadband to homes. That poses a long-term threat to cable TV companies such as Comcast (CMCSA) that dominate in broadband services.

Rysavy Research forecasts that within five years 5G broadband will emerge as a legitimate rival to cable’s high-speed internet services.

5G networks also will improve latency, the lag time it takes networks to respond. That’s crucial for applications such as autonomous driving, remote telemedicine and factory automation. 5G networks reduce latency to a few milliseconds from lags of 50 to several hundred milliseconds.

Edge computing deploys data processing, storage and networking close to sensors and where other data originate, near the “edge” of the network. The goal is to process and analyze data locally in real time rather than send it to faraway data centers in the internet cloud.

That should be a big opportunity for chipmakers Nvidia and Intel, some analysts say. Nvidia and Intel are the biggest providers of data center processors for cloud applications.

“The advent of 5G should mean the rollout of many new technologies we certainly haven’t yet imagined,” said economist Ed Yardeni in a recent report. “To make them possible, the tech gurus are saying that cloud computing will move from a cloud server far away to equipment on the edge of a neighborhood’s network. Edge computing should continue to increase the speed of data transmission, but carriers will have to open their wallets to make it happen.”

How This IBD Tool Simplifies The Search For Top Stocks

Get Full Access to IBD Stock Lists And Ratings

These Stocks Earned A Spot On The IBD Leaderboard 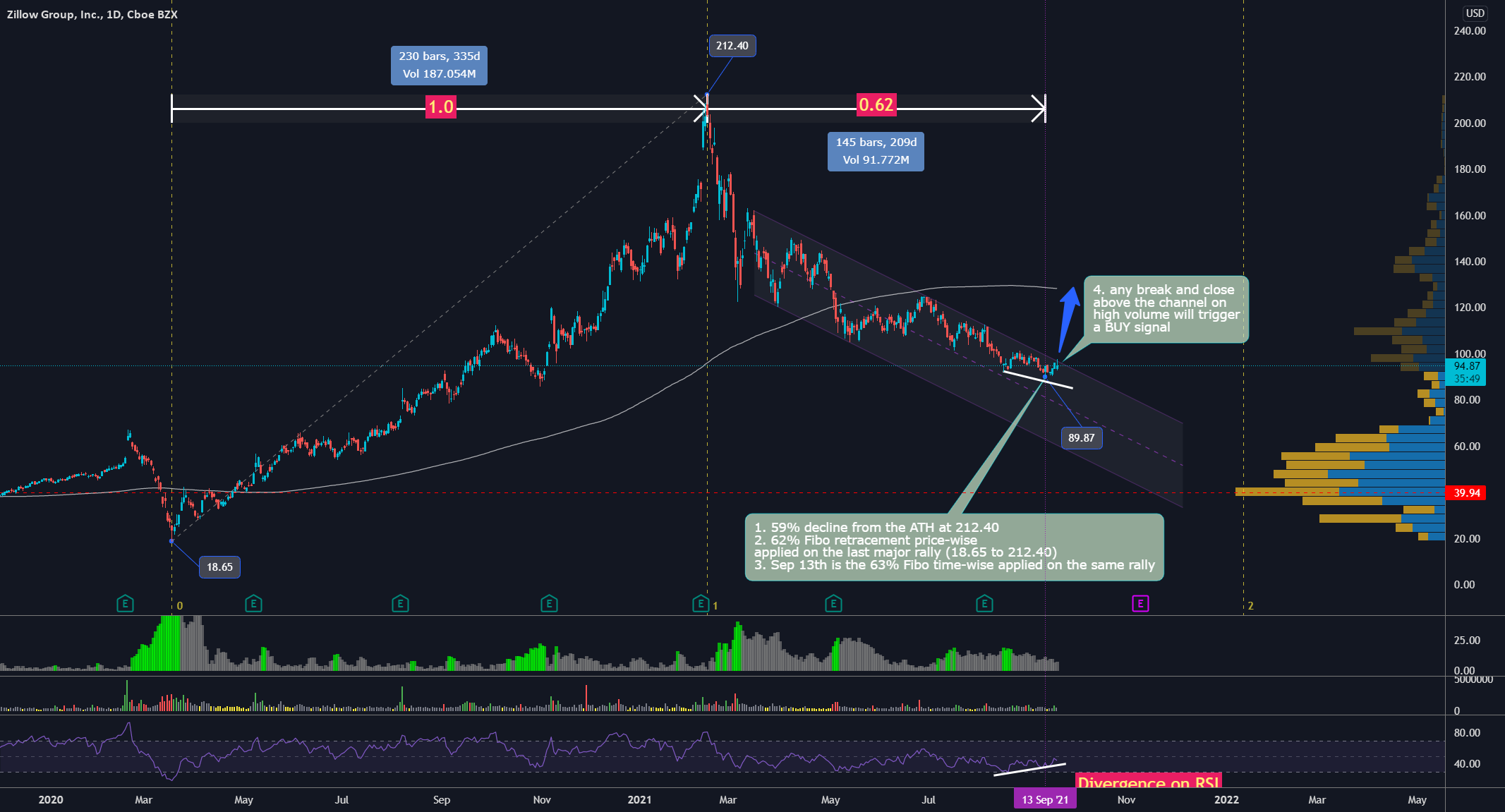 Which Real Estate Technology Platform Stock to Buy Now? for NASDAQ:ZG by IboProtrader
15 seconds ago

Which Real Estate Technology Platform Stock to Buy Now? for NASDAQ:ZG by IboProtrader

Robots must protect dogs in the first trailer for Apple’s Finch, starring Tom Hanks
5 mins ago