Renewable energy stocks have been on fire over the past year as investors begin to recognize the industry’s growth and maturation over the last few years. It didn’t hurt that President Biden’s election is likely to lead to some policy gains for wind, solar, and energy storage over the next four years.

If you’re still on the fence about renewable energy versus other energy stocks, there are three reasons renewables are the future.

Growth is with renewable energy

Oil, natural gas, coal, and nuclear energy may still be bigger energy sources from an absolute consumption basis than any source of renewable energy — but they’re not where the growth is. You can see below that wind and solar energy are by far the fastest-growing sources of energy in the U.S. since 2000, and the same trends hold worldwide. 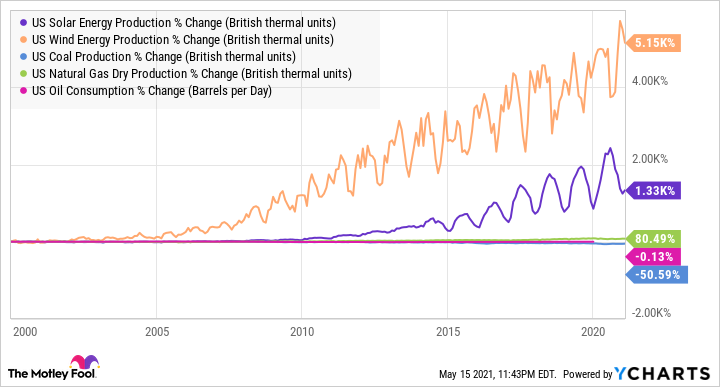 Despite all of this growth, wind energy only accounts for about 8.4% of all electricity consumed in the U.S. and solar energy is 3% of the electricity supply, so there’s a lot of growth potential ahead. And there’s one big reason wind, solar, and other renewable energy assets will keep growing.

Renewables are cheaper than fossil fuels

Below is the unsubsidized cost of wind, utility-scale solar, natural gas, nuclear, and coal power plants according to Lazard’s Levelized Cost of Energy Analysis, which it publishes every year. You can see that between 2010 and 2020, the cost of wind and solar have plummeted and the only fossil fuel that’s gone down in cost is natural gas.

What’s more impressive is that the cost of wind and solar energy now beats fossil fuels in most locations. This is no longer an industry that’s driven by subsidies or environmentalists — it’s cost-effective and winning cost-competitive bids long-term. The next step it needs to really take over the energy industry is making energy storage a viable business.

What gives me the most confidence about renewable energy long-term is the fact that innovation continues to drive the industry. Innovation helps lower cost, build better business models, and drive new technologies. Here are a few innovations I’m excited about on the horizon.

As with any innovation or new product, we don’t know what’s going to win and different companies are taking different strategies to market, so there are still lots of risks for investors. But one way or another, I think innovation will drive the renewable energy industry forward.

How to invest in renewable energy stocks

If you’re diving into renewable energy, I’ve mentioned three stocks that should do well as the companies grow. I like SunPower in residential and commercial solar and storage and Bloom Energy in hydrogen fuel cells.

If you’re more risk-averse and are looking for dividends, Brookfield Renewable Partners (NYSE:BEP) and Hannon Armstrong Sustainable Infrastructure (NYSE:HASI) are spending billions to build and buy renewable energy and energy storage projects around the world. They’ll generate cash flow from these projects, which drive dividends that yield 3.2% and 3% respectively. No matter where you invest, renewable energy clearly has the tailwinds in the energy industry.