Joe Biden’s plan to plug tens of thousands of abandoned oil wells across the US risks rewarding fossil fuel operators who shirk their clean-up responsibilities and hooking the industry on taxpayer bailouts, critics say.

The president’s $2tn infrastructure proposal includes $16bn for cleaning up disused wells and mines. The White House reckons the project could create “hundreds of thousands” of jobs while ending hazardous leaks.

But some analysts argue the project will leave taxpayers footing a bill for past negligence and encourage more bad behaviour in the future.

“The worry is that the oil and gas industry is going to take this and say: ‘We don’t really have to clean up our act because if we don’t, we know the federal government is going to step in’,” said Clark Williams-Derry, an analyst at the Institute for Energy Economics and Financial Analysis.

State regulations require operators to plug wells at the end of their lifetime — a process that can cost anywhere from $4,000 to $150,000. While this is only a fraction of the $8m expense of drilling a well in the first place, big drillers have become adept at offloading old wells, which often end up in the hands of smaller producers who cannot afford the clean-up costs.

“There’s a process of basically spinning off your liabilities into successively weaker operators . . . until the company is maybe thriving somewhere else but has no responsibility for cleaning up the mess they were initially responsible for,” said Williams-Derry.

Most states require companies to post bonds to cover the cost of plugging their wells should they go out of business. But the money set aside tends to be too low, leaving states unable to cover the costs when companies go bankrupt.

The president’s plan would target wells whose owners are either unknown or have collapsed into bankruptcy. There are 56,600 documented cases of these “orphan” wells across the country, according to the Interstate Oil & Gas Compact Commission, with estimates of as many as 746,000 more undocumented. Many of these date back to the oil boom of the late 19th and early 20th century when wells were drilled from Pennsylvania to Texas with little regulation or planning.

If you need to if you need to get the water out of the bathtub, one of the first things you have to do is shut off the faucet

Biden sees tackling the orphan well problem as an opportunity to address two of his administration’s priorities — jobs and climate — simultaneously. The project would create work in rural communities hit hard by last year’s crash, while at the same time preventing leakage of methane into the atmosphere and oil and brine into the ground.

A programme in North Dakota last year used $66m in stimulus funds to create 1,380 full-time jobs plugging 280 wells. It was an “absolutely tremendous success” and acted as a “pilot” for the Biden plan, said Ron Ness, president of the North Dakota Petroleum Council, an industry group. 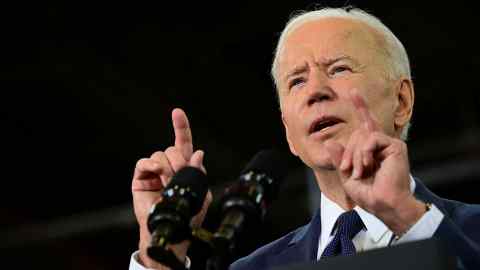 “It accomplished not only putting people back to work — which allowed them to feed [their] families and stay engaged — but it reclaimed these old abandoned wells, and returned it to farmland,” said Ness.

But the North Dakota programme drew criticism for also including wells transferred from active operators who could have shouldered the burden themselves.

Some analysts argue the Biden plan should make funding conditional on the industry allocating greater sums to cover the costs of future clean-ups.

“If you need to if you need to get the water out of the bathtub, one of the first things you have to do is shut off the faucet,” said Robert Schuwerk, executive director at Carbon Tracker.

One way to do this would be to prioritise funding for states that commit to overhauling their bond programmes.

“The question now is really in the details,” said Schuwerk. “Are they going to be providing [funds] to states that are trying to address this problem going forward? Or is it just going to go willy-nilly to anybody for jobs?”