Never have central bankers so seemingly sung from the same hymn sheet as Fed policymakers have in the past few weeks. Having successfully aligned market expectations, the Federal Reserve is almost certain to repeat the message that QE tapering is not on the near-term horizon when it meets next week. The Bank of Japan is also not expected to diverge from recent language when it announces its latest policy decision. Traders are therefore likely to turn their focus on the economic data as they could confirm that the boom time in America is here just as the Eurozone slips into a double-dip recession.
BoJ to upgrade growth forecasts as Japan fights fourth wave
Japan is one of the least virus-hit countries in the world despite never having gone into a full lockdown. But Covid cases are rising again, which means several regions could be placed in a state of emergency, curbing business activity. Nevertheless, strong demand for exports is supporting the economic recovery and the Bank of Japan is expected to revise up its growth forecasts when it concludes its two-day policy meeting on Tuesday.
The brightening outlook has yet to translate into higher price pressures and the BoJ will probably lower its inflation forecast for the current financial year. But aside from the updated projections, not much else is expected to change at the April meeting. The Bank has already adjusted some of its existing policies to make them more sustainable, sending a clear message to the markets that it will stick with its mix of monetary easing measures for some time to come.

This puts the yen entirely at the mercy of rising yield differentials as global government bond yields have surged this year, with the exception of Japan’s, which are being pressed down by the BoJ’s yield cap. A weaker yen has come as good news for domestic policymakers and investors will likely shrug off next week’s data barrage, which will include retail sales on Wednesday, and jobs numbers and the preliminary industrial output reading on Friday.
Euro bounce at risk from GDP data
It’s been a good month so far for the euro, cracking the $1.20 handle as the dollar sagged. But the upswing appears to be losing momentum and there could be further hindrance from next week’s flash GDP estimate due Friday. The Eurozone economy is expected to have shrunk by 0.8% in the first three months of the year compared to the previous quarter. This would confirm predictions that the euro area entered a double-dip recession. However, the big Eurozone economies have weathered the latest virus storm much better than anticipated so a smaller-than-forecast contraction is possible. More importantly, a loosening of lockdown restrictions in the coming weeks and a pickup in the EU’s vaccination pace should set the ground for a solid rebound in Q2. Hence, the euro may actually find support in the data if investors can look past the recent gloom. 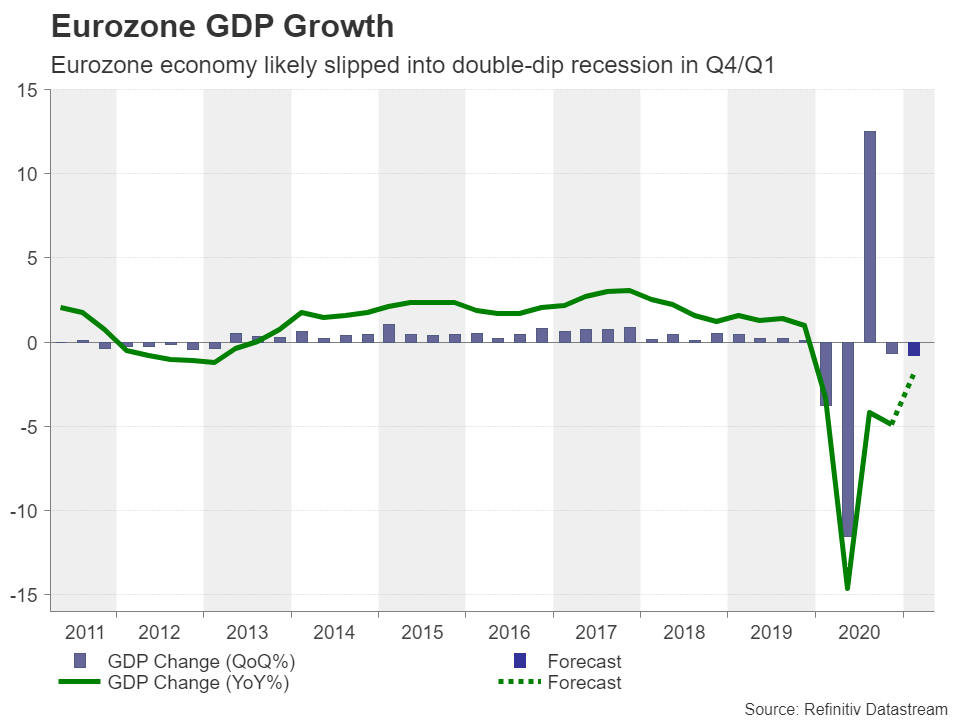 Flash inflation estimates are also out on Friday and are expected to show the headline figure edging up to 1.6% year-on-year in April. Other notable releases next week are Germany’s Ifo business climate index on Monday and the Eurozone economic sentiment indicator on Thursday.
Booming US economy might eclipse FOMC meeting
The second quarter has gotten off to a banging start on Wall Street. A positive opening of the earnings season, accompanied by a very dovish Fed, have pushed the S&P 500 to fresh all-time highs. The earnings season will be firing up next week, with Tesla (NASDAQ:), Microsoft (NASDAQ:), Alphabet (NASDAQ:), Apple (NASDAQ:), Amazon (NASDAQ:) and Facebook (NASDAQ:) being some of the big names scheduled to report their results.
The economic calendar is also looking jampacked. Durable goods orders (Monday), the consumer confidence index (Tuesday), advance GDP and pending home sales (Thursday), and the personal income and outlays report (Friday) will all be watched closely as US growth picks up a gear.
The preliminary GDP print for the first quarter is expected to reveal that annualized growth accelerated to 6.5% from 4.3% as the US economy benefited from two injections of fiscal stimulus. Personal income is forecast to have jumped by 20.3% month-on-month in March, as Americans received their third stimulus checks from the federal government. Although consumption is projected to have risen by a more ‘moderate’ 4.3% m/m. The core PCE price index – the Fed’s preferred inflation gauge – is expected to have ticked up to 1.8%. 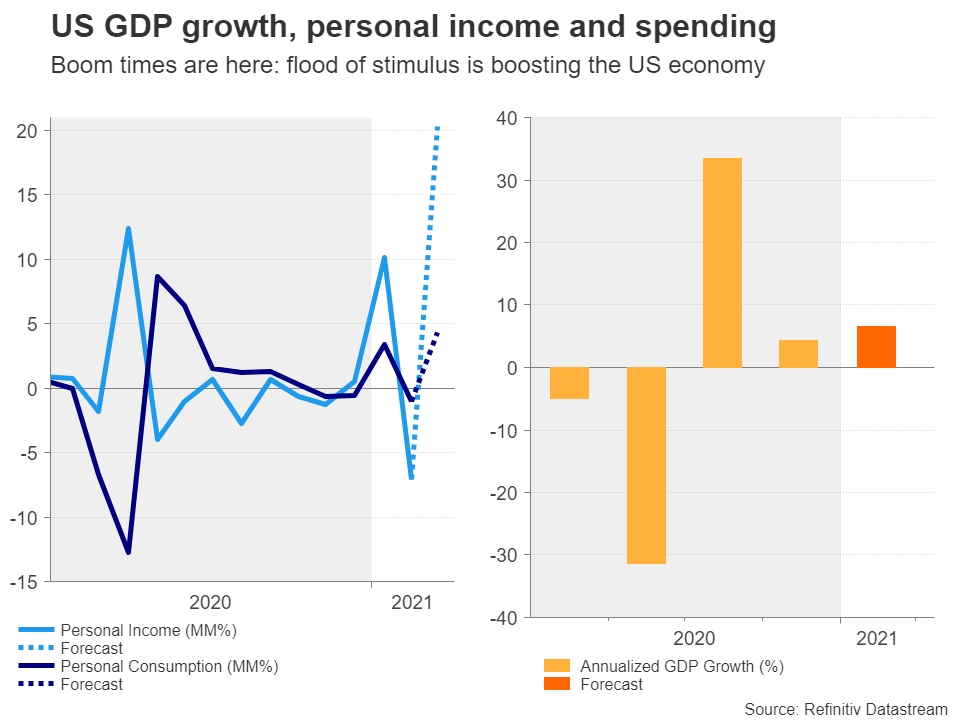 Investors have already mostly priced in a supercharged recovery in the US so an upbeat set of data shouldn’t really generate a huge reaction. However, when the Fed is so dovish that markets are becoming more worried about an overheating economy than the central bank is, there is a real risk that exceptionally strong numbers could reignite fears of higher inflation.
The Fed meets on Tuesday and Wednesday and is almost certain to keep all of its monetary policy settings unchanged. Chair Jerome Powell is unlikely to provide any new insights on future policy in his press conference as he and his colleagues have been unusually consistent in what they’ve been telegraphing to the markets. The Fed has not budged from the assertion that tapering is a long way off and that any spike in inflation will be temporary.
However, as the data continues to get better, it might become harder for bond markets to remain calm. The dollar has taken a nosedive during April but all it would take is for another major selloff in Treasuries to push up yields, and in turn, the greenback.