Shares of Nano Dimension (NASDAQ:NNDM) gained 16.1% in June, according to data from S&P Global Market Intelligence. The semiconductor 3D-printing specialist’s stock gained ground thanks to strong momentum for the broader market.

After several months of volatile trading, growth-dependent technology stocks enjoyed strong gains in June. The Nasdaq Composite index climbed 5.5% in the month, and Nano Dimension stock advanced as investors warmed back up to tech stocks.

There doesn’t appear to have been much in the way of business-specific news behind Nano Dimension’s gains last month. The company did receive approval from the U.S. Patent and Trademark Office on June 15 for “double-sided and multilayered printed circuit board fabrication using inkjet printing,” but the patent approval does not appear to have had a significant correlation with Nano Dimension’s stock gains.

Nano Dimension’s share price has slipped early in July’s trading. The company’s stock is down roughly 6.6% in the month so far. 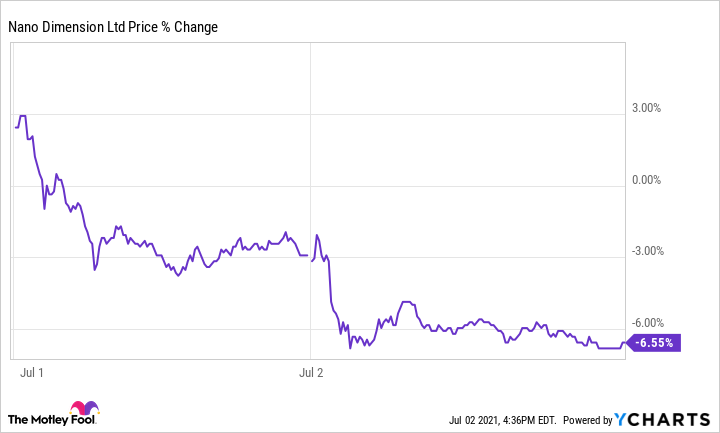 Nano Dimension stock has made huge gains over the last year, with its share price up roughly 263% over the period. The company has managed to deliver strong returns even as it has completed substantial new share offerings in order to fund business operations. The Israel-based tech specialist has increased its outstanding share count by more than 450% over the last year, and its market capitalization is up roughly 2,600% over the stretch.

Nano Dimension now has a market capitalization of roughly $2 billion and is valued at a whopping 395 times this year’s expected sales. While the company is an early pioneer in applying 3D-printing technologies for the additive manufacturing of semiconductors, investors should proceed with the understanding that the stock is a highly speculative bet at this point.

The company’s DragonFly LDM machines have seen some adoption from research institutions and enterprise customers, and the 3D-printing specialist has recently launched a next-gen version of the hardware. These machines allow for the quick creation of prototype semiconductors and could make the development of chips and general technologies significantly faster and more efficient in some industries. However, Nano Dimension stock remains a high-risk, high-reward investment, and there’s not much visibility on how its business will grow over the next five years.

Yankees’ Kluber confident of return this season
2 seconds ago Steam Deck order delay? The latest on reservations for the console that’s taking on Nintendo Switch
1 min ago