The United States began the 20th century as a rural nation, evolved into a nation of cities, and ended the century with a suburban majority.

The first half of this transition—from a nation of farmers to one of urban workers—was part of a global trend, as economies shifted from agrarian to manufacturing to services. The second half—from a nation of cities to a nation of suburbs—was especially pronounced in the U.S. due to government policies that invested in suburbanization.

These policies included federal subsidies for suburban mortgages, tax subsidies that favored sprawl, and the construction of urban highways that destroyed dense neighborhoods of color while speeding suburban commuters to downtown jobs. By dispersing and isolating different people and assets, these policies supersized segregation and left behind a fragile, unjust infrastructure landscape.

In this piece, we analyze urban-to-suburban population shifts over the last 70 years to underscore how wealth and jobs moved out of American cities and left behind segregated, disinvested communities. A solution, we conclude, can be found through a broad coalition of pro-growth as well as racial and environmental justice groups to advance regionwide prosperity through reinvesting in urban cores.

Metro areas have grown, even as their cores have shrunk

The halfway point of the last century, 1950, was a critical inflection point in the country’s transition from rural to suburban. At that time, just under a quarter of the nation’s population lived in suburbs. But as private finance abandoned urban cores and government urban policy shifted from focusing on the desires of urban residents to treating them as charity cases needing outside “help,” the transfer of wealth to the suburbs accelerated.

To measure the shift from urban cores to suburbs during the last 70 years, we compared the populations of what were the 50 largest cities in 1950 and the 44 metropolitan areas that contain them today. We used 1950 boundaries for central cities to avoid population change due to annexation, and 2018 boundaries for regions to ensure that all suburban growth was captured.

Between 1950 and 2018, these 44 metro areas in aggregate grew at the same rate as the nation. However, city populations plummeted: The median share of the population within 1950 city limits is down from 53% in 1950 to only 19% today. In 2018, only New York (49%), had more than a third of its regional population living in the historic urban core.

That most new development since 1950 has been built in suburban areas played a substantial role in this shift, but suburban growth isn’t the whole story. Between 1950 and 2018, the median principal city also lost 30% of the population within its 1950 boundaries, even as the median metro area population nearly doubled (for example, Columbus, Ohio in Figure 1). The past 70 years of suburban growth in the United States have entailed both massive investment in greenfield development and a substantial hollowing-out of existing urban cores.

The suburban population shift would be concerning enough if it was simply a story of Americans abandoning cities for low-density sprawl. However, there is also a major difference in the racial breakdowns of communities that have and have not been invested in over the past 70 years.

American suburbs have always been whiter than urban cores. This is because of zoning practices intended to keep low-income groups from settling in suburbs, as well as restrictive covenants and racist lending and real estate practices that made it difficult for even high-income Black and other minority residents to move to new suburban developments. However, in 1950, the median metro area’s principal cities were 88% white. No metro area’s principal cities were less than 60% white, and only 10—all in the South—were less than 80% white.

The end result is that since 1950, the racial composition of some cities and suburbs have radically diverged. Today, 86% of the white people in our study area live in suburbs. Table 2 shows that this trend is minimal in Western cities, and at its most extreme in Rust Belt legacy cities. 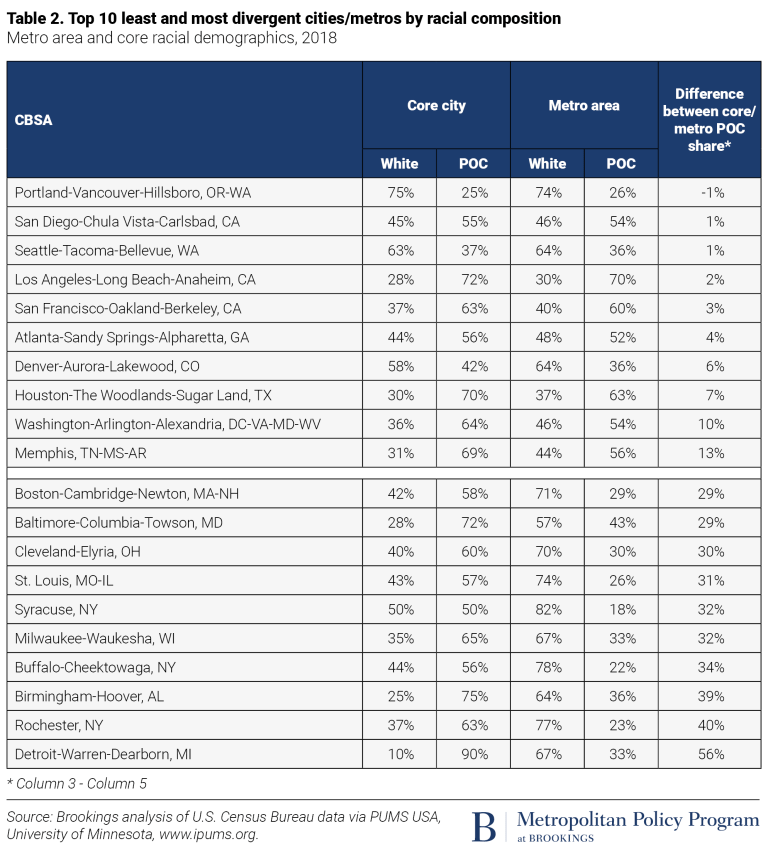 Meanwhile, a change in the geography of employment has reduced job opportunities for low-income communities concentrated in urban cores. By 2001, only a fifth of jobs in large metro areas were within 3 miles of the city center, as employment moved to suburban (and particularly, high-income suburban) areas, often out of reach of public transportation from urban cores. With this came additional concentration of regional wealth and tax bases in high-income and largely white suburban jurisdictions, further disadvantaging residents of urban cores.

Partly due to displacement caused by urban gentrification in some cities, impoverished populations have also begun to move to suburban areas. But they have generally not located in the same suburban areas where jobs concentrate. These shifts have fundamentally changed the reality—and the politics—of who and what center cities are for.

The costs of suburban development fall on city residents

Since 1950, states and the federal government have made massive investments in suburban development. These investments included the construction of urban highways and subsidies for mortgages on suburban single-family homes, while urban cores were neglected and neighborhoods were wiped out in the name of urban renewal.

Seventy years of disinvestment in the nation’s urban cores has occurred at the same time as people excluded from the economic mainstream—particularly people of color—became increasingly concentrated in those cores. Redistribution of wealth and infrastructure toward suburbs has also served to redistribute wealth and opportunities away from the populations of color concentrated in cities. In more recent years, even as suburbs have diversified overall, they have remained largely individually segregated, with majority-minority suburbs housing more low-income people and renters, having weaker property tax bases, and facing fiscal struggles as a result.

The costs of the suburbanization of America have not solely fallen on inner cities. The per capita infrastructure costs of building and maintaining low-density development are significantly higher than for dense cities. These costs are becoming particularly evident as the original infrastructure in older, inner-ring suburbs is reaching the end of its lifecycle while economic growth has moved elsewhere.  Road infrastructure is generally the largest single-item expense for low-density, car-oriented development, and the costs of new roads have largely been funded by not fully funding the maintenance and repair costs of roads in legacy communities, even as the taxes paid by residents of those communities subsidize the construction of infrastructure for new growth.

In addition to these social and fiscal challenges, we are beginning to fully understand the severe environmental consequences of 70 years of massive suburban growth. These include significantly greater carbon emissions from transportation, and worsened stormwater runoff as larger and larger areas are covered with impervious surfaces for roads and parking. Suburbanization has greatly increased our population’s exposure to climate risk while at the same time accelerating climate change itself.

Long-term prosperity for metro areas cannot rest entirely on such low-density land use. Suburbs need their cities, and the suburban form must evolve.

In the Biden infrastructure bill, an opportunity for coalition-based change

As we reinvest in America’s infrastructure, we can build a broad coalition of business groups, environmentalists, racial justice advocates, urbanists, and local government leaders for the work by illuminating both the efficiency and fairness of improving infrastructure that serves urban cores and that benefits both regions as a whole and low-income people of color, while correcting past injustices such as the location of air pollution sources (including urban highways) in their neighborhoods. The Biden administration’s infrastructure proposal could be a transformative step in this direction, with a combined transit and intercity rail spend that is larger than the proposed highway spend for the first time in modern U.S. transportation policy. The proposal also contains large allocations to improve pedestrian safety, electrify transit buses, and eliminate exclusionary zoning laws.

As Congress refines this initial proposal into a bipartisan bill, regardless of the total size of the final package, these framing values should be preserved. It is not enough for Democrats to signal them—they must make it into actual policy. This means congressional committees working in tandem must structure programs within the overall package to reverse the disinvestment trends shown in this brief while promoting justice for the marginalized communities that have been concentrated in urban areas and older suburbs. It is also critical for the environment and for communities bisected by urban freeways that allocated highway funding be restricted to road and bridge repair and not used to fund freeway expansions that feed sprawl. Likewise, state departments of transportation need to work with neighborhoods divided by highways to ensure that freeway removal and neighborhood reconnection are done in ways that actually help regenerate wealth in these communities.

Pro-growth groups and those committed to racial and environmental justice are often at odds with each other. The right infrastructure vision, however, could be a transformative opportunity to build trust and work together.