When the Golden State Warriors face the New Orleans Pelicans on Monday night, there will be plenty of star power on the court — and on the broadcast. Monday’s game will feature a first-of-its-kind Marvel-themed presentation on ESPN2, ESPN+ and ESPN Deportes, with iconic Marvel characters Iron Man and Black Panther selecting players from each team to help fend off an impending threat.

But what if the situation was reversed? What if Warriors GM Bob Myers and Pelicans GM David Griffin had to draft characters from the Marvel Cinematic Universe to help fend off the impending threat of missing the NBA’s play-in tournament — where the Pelicans are currently three games behind the Warriors as they fight for the final spot. How would the skills of these epic warriors translate to becoming basketball Warriors (and Pelicans)?

To get you ready for Monday night’s heroic action, we tasked ESPN’s Andrew Lopez and Ohm Youngmisuk with drafting lineups of characters from the MCU to assemble two superteams that put the 2020-21 Brooklyn Nets to shame. Check out these rosters, filled with heroes, gods, and … bugs?

Let’s get things started with the Mad Titan himself. The being who once wiped out half of all life in the universe will certainly be able to hold his own on the basketball court. The MCU version of Thanos stands over 8 feet tall so he’ll have no problem as the anchor of my defense. Who really wants to challenge him at the rim? Thanos doesn’t have to venture far out from the rim either on offense a la Zion Williamson, who rocks an Infinity Gauntlet chain and has publicly declared Thanos to be his favorite character. You saw what it took to stop Thanos in “Avengers: Infinity War” and “Avengers: Endgame” (Please draft Star Lord. Please draft Star Lord). Try that strategy here and I have four other guys to knock down shots. 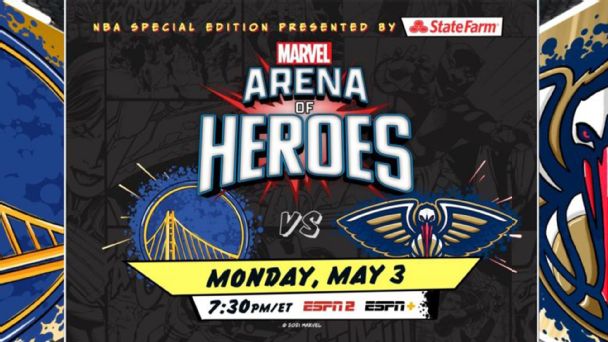 ESPN and Marvel announced a groundbreaking collaboration to launch the first-ever Marvel-inspired alternate presentation for the Warriors vs. Pelicans game on Monday, May 3. The exclusive alternate presentation will start at 7:30 p.m. ET on ESPN2, ESPN+ and ESPN Deportes with the traditional game telecast on ESPN.

Not even my pal Lopez could screw up the top overall pick by going with Thanos, who is like Shaq, LeBron and Zion wrapped in one. But Thanos can be beaten, even if it takes 14,000,605 different outcomes as Doctor Strange saw. So while Thanos might look like he’s “inevitable” on the game tape, our war room has been busy assembling the starting five that will save the universe, starting with the most athletic superhero on our board: Black Panther. King T’Challa’s combination of superhuman strength, speed, majestic agility and acrobatic moves along with ridiculous reflexes jumps off the tape and reminds us of Kyrie Irving. Try staying in front of him. With his Black Panther suit composed of vibranium and able to absorb energy, he can maneuver his way through any paint and finish through contact — even against Thanos. Wakanda Forever!

Let the record show that Ohm stole the second player on my draft board. So let’s go with a player with positional versatility in Scott Lang. Will he be Muggsy Bogues? Can he be Manute Bol? Is he everything in between? Yes. Guard the perimeter? Check. Give Thanos a break in the post? Absolutely. Every team needs a jokester — although any sort of card games on the team plane could get interesting. Also, at the end of the game in the final seconds, he can protect the rim unlike any other player.

The war room erupted when Iron Man dropped to us with the fourth overall pick. In any other year, Iron Man is the No. 1 overall pick. Want to talk basketball IQ? Iron Man is the only superhero to outsmart Thanos and beat him. Who else can build a suit in a cave and solve time travel? When healthy, his versatility makes him arguably the league’s MVP. He can score in a variety of ways, plays above the rim, can attack the paint with power and plug any leaks in the defense. His fixation on protecting the entire planet is proof of an elite defensive mindset. Tony Stark’s off-the-charts intellect, his ability to constantly innovate, improve and rebuild from injury — and even his complex personality — reminds us of Kevin Durant. That makes him the perfect forward for our team.

You take Stark, I’ll take Stark’s protege. That works out for me. Not quite sure if web-slinging is allowed in this basketball game but even if it isn’t, I still feel good about this pick. Peter Parker has the speed, the reflexes and the strength to handle his own against anyone. He’s everything you want in a perimeter defender. And let’s get to his ball-handling ability. He’ll never lose it! He’s everything you want in a point guard. And don’t even try to come around with a back-tip steal or anything like that. Boom. Spidey-senses. Sure, he’s a little young, but he has all the tools. Man, I probably should have taken him earlier.

Hulk smash! Lopez has a lot of speed in that backcourt between Spidey and Ant-Man. But Hulk gives us the gamma-radiation muscle boost we need to battle Thanos. Hulk is practically indestructible and his combination of strength and smarts takes our team to another level. While Lopez is playing checkers, we’re playing chess. Combine Bruce Banner’s mind with Stark’s and our brain power is unmatched. No one can scheme like us. But watching Hulk attack with relentless rage and ferocity reminds us of Russell Westbrook. He plays angry and is either going to score near the rim or find an open teammate. And he’s a rebounding force. We can see Hulk piling up the triple-doubles and he can play above the rim, leaping and flying. Your move, Lopez.

Oh look, a friend from work!

Why not pick a literal god on your team if you get the chance? Thanks for letting him slide down to me, Ohm, and allowing me to build an old-school bully-ball frontcourt with Thanos and Thor, who can be a mix of a classic throwback on-the-block power forward with a speed boost right out of today’s modern game. Just think about having to go through a double screen set by Thanos and Thor. Ouch. Seriously. Ouch. Thor can chase down every rebound. One small thing Thor might have to get used to: The basketball won’t always return to his hands like Mjolnir does. But I think we can work through that.

We will counter your Thor pick with the only other superhero worthy of holding Mjolnir: Captain America. We’ll gladly take the leader of The Avengers to lead our team. There simply is no better floor leader in the universe than Cap. Want to talk about a draft combine specimen? Steve Rogers’ makeup, measurables and what he stands for reminds us of LeBron James. Just like how LeBron looks like he was made in a lab, Rogers’ super-soldier serum makes him perfect for combat on the court. He combines strength, size, speed with sheer will that is unparalleled. He always fights for causes he strongly believes in. Captain America never seems to tire, no matter what his true age is. And he can use his vibranium shield for signature chase-down blocks.

I am Giannis! I mean, Groot! The combination of size and strength is reminiscent of the two-time MVP. And if we’re being honest, all I keep picturing with Groot on the court is Michael Jordan. No, no, not anything like Jordan’s skill set on the court. I’m talking about “Space Jam.” Remember at the end when Jordan realized he was in a cartoon setting and his limbs could do things he normally couldn’t? I’m picturing Groot just dropping in shots from anywhere on the court. And they’d count for three points!

Also, I’m not worried about any language barrier here. After all, Thor speaks Groot because he took it on Asgard as an elective.

We need some perimeter shooting and who better to operate in space than Captain Marvel. Test Captain Marvel if you want to like Thor did when he had Stormbreaker fly right by her head. Not only is Carol Danvers fearless, she has game-changing powers. Like Stephen Curry, who also seems to be powered by the Tesseract, Captain Marvel can hit shots from outer space and catch fire at any time. Captain Marvel can strike from anywhere, glows with a fiery aura when at full strength and can take down an entire spaceship with her abilities. You can make the argument that Captain Marvel is more powerful than any of The Avengers. And we love Captain Marvel’s swagger. We’re ready to take down Thanos!